Lee Wilson was born in 1864 to Francis and Nancy Ann Slaughter. She and her husband Sam, a for real cowboy who drove cattle on the Chisholm trail, built a home in Burnet County Texas.

Lee Wilson was born in 1864 to Francis and Nancy Ann (Elkins) Slaughter. She and her husband Sam, a for real cowboy who drove cattle on the Chisholm trail, built a home in Burnet County Texas. She worked as a “bone woman” collecting the desiccated bones of bison and other critters to be ground as fertilizer while Sam rode the long hard trail driving cattle north to the railroads in Kansas. There on the Colorado River, they raised a large family, giving birth to my great-grandmother, Jessie Jewel, in 1901. It was a life not without it’s tragedies, losing her son Roy at age 19 in 1914, and a daughter again in 1918.

I began composing this letter while visiting the cemetery where she and Sam are interred. Hoover’s Valley Cemetery, near a ghost town of the same name, a few miles from Kingsland, Texas. Hoover’s Valley is also the resting place of the Whitlock family, unfortunate victims of an Indian attack in 1870, which I intend to cover in a separate post. 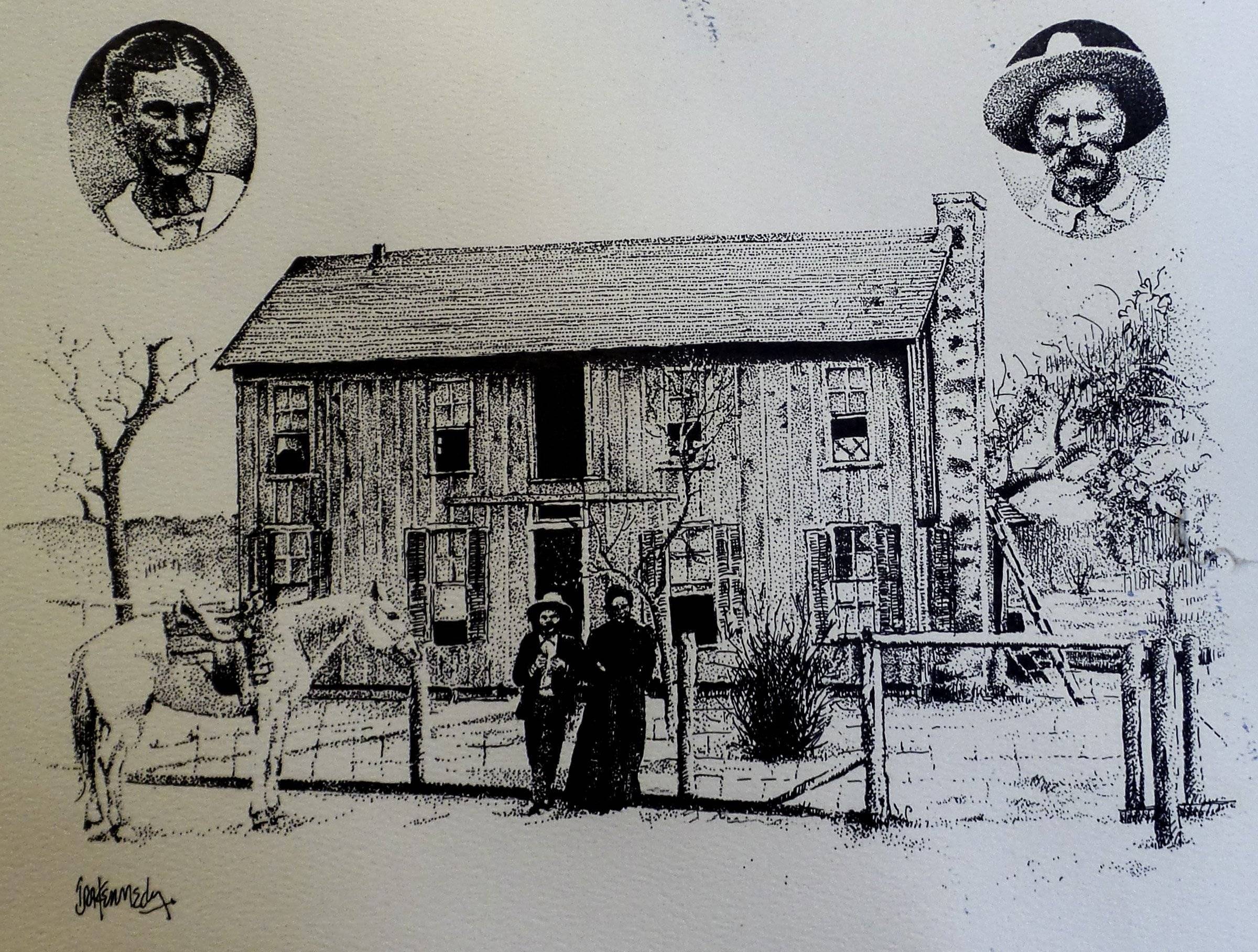 Wilson Homestead was located by the Colorado River in the Texas Hill Country. From a photo taken around 1904

The Wilson homestead has been underneath Lake Inks since 1938 when the Inks Dam was completed. Lee would have lived long enough to watch it vanish beneath the rising water. This print was from a photo, the original drawing on commission by well-known Texas artist Ira Kennedy. My great grandmother Hallmark was a little girl holding a doll in the photo, she insisted on being left out of the drawing. Check out Grandpa, that dude is THE COWBOY. Awesomeness.

Dear Grandma,
You left this world 23 years before I discovered it, I can only say that I would like to have known you. I have no doubt that you were a woman of strength and character. Even though only a short span separates our lives, you grew up in a vastly different world than the one I have experienced these two-score and sixteen years of my pilgrimage, as it were. You grew up in the shadow of the Civil war, the daughter of a veteran of a lost cause. You experienced life on a frontier, where life was hard and uncertain, It was the edge, where a misstep or snake bite could mean death, where two cultures were still clashing with sudden, often unexpected, violence. A life few people of the tame lands of the east understood.

If only I could speak to you, what would I say? Would I try to explain the world in which I dwell? Or would I simply wish to sit and hear of your life?

To hear of the dangers and hardships you faced, but also the joys and happinesses you had as a child, a favorite doll, the favorite meal that your mother made. How you felt when holding your first child for the first time. I would hear from what well you drew strength on the long, lonely nights when Sam was hundreds of miles and weeks away and the hard days ahead seemingly endless.

I would ask about what you thought about on those long, hot days, as a young woman, gathering bones to be ground as fertilizer to earn a subsistence. Earning a hard-living pulling the fuel for the fires of life from a  land that gave away nothing, but required the blood, sweat, and soul of every living thing that has ever called it home. But a land each day offers vistas of such raw beauty  and displays of power as to be breathtaking.

I could ask you how you felt near the end of your life, knowing that the land upon which you had labored and built a home and life was swallowed by the waters of progress. What did you think, seeing the walls of steel reinforced concrete rising to block the valleys of the Colorado, to power and provide a constant supply of water to the growing towns.

I know that you would likely find that landscape dominating eyesore of a castle off Park Road 4 just as appalling and ludicrous as I do, and maybe we could share a laugh about it.

Perhaps I would simply thank you, for without your life mine would not be. And I would ask if you are proud of me, this odd descendant among your uncountable descendants, most of whom, I suppose have never heard of or even pondered you, because this is the way of the world, the past and its people remembered briefly, then forgotten as the river of time flows onto the sea of eternity.